In the last week I've had a few new adventures in the kitchen. What with the need to use the products of my garden yet-unharvested, I can't stick around here very long, so I'll be brief, and just now give you the link for the wonderful slow-roasted cherry tomatoes everyone seems to be talking about. You might have some little tomatoes around you could try this on. They are just as delectable as "everyone" says. If I had discovered them earlier in the summer....well, I didn't. But next year!

I still have all three types and colors of cherry tomatoes, which is why my end r 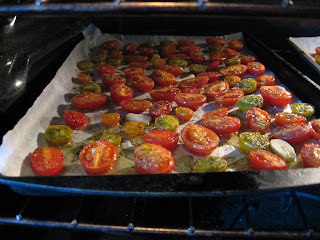 esult includes some very babyish ones. The smaller ones I took out of the oven after 3 1/2 hours, but the large red ones I left in all 4 hours.

The original recipe creator, I think it was, said that she likes a good amount of fennel in her seasoning, so I used 1/2 teaspoon of fennel seeds and 1 1/2 teaspoons of an "Italian seasoning" mix for my seasoning. The finished tomatoes were just perfect, so I'll do the same thing again tomorrow with what I picked today. 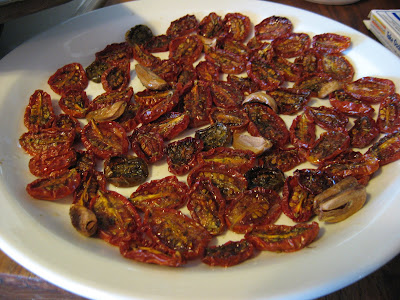 I can see why households with children wouldn't have any of these left over, but as there were only two of us, I put some in the freezer for later. If I hadn't exercised such discipline, though, I'm sure they would have quickly disappeared.
Posted by GretchenJoanna

They LOOK GOOD! Yum! Yum! I am savoring the harvest oriented blog posts! Soon, the goods will be gone. I hope you'll share the satisfaction of using the storehouse this winter!

I am SO doing this! I have oodles of grape tomatoes and pear tomatoes and I'm the only tomato eater in the house. This will be a wonderful way to eat and save the last of my tomatoes before the frost.

Newer Post Older Post Home
Subscribe to: Post Comments (Atom)
Once I planned to write a book of poems entirely about the things in my pocket. But I found it would be too long; and the age of the great epics is past. --G.K. Chesterton

Pages on This Blog


On my bedside table:

--The Historical Road of Eastern Orthodoxy by Alexander Schmemann

--Everyday Saints and Other Stories by Archimandrite Tikhon (Shevkunov)

--A Green Journey by John Hassler

--What W.H. Auden Can Do for You by Alexander McCall Smith

--The Madonnas of Leningrad by Debra Dean

--Crossing to Safety by Wallace Stegner

Crude Classifications--postings by month are lower down.

Crude Classifications is a phrase I first stole from George Bernard Shaw here.

Given that
1) Christ is my life, and the center of salvation history, and

3) we know and experience The Holy Trinity through that Church,

I couldn't come up with any better category name than "church" for those blog posts relating to God, faith, Christianity, etc. It would make some sense to assign that tag to every post I write.

I've added many more tags lately without reorganizing everything, so now they are both crude and inconsistent.